We've come to our last full day in Seoul, and we had just enough time to squeeze in one more visit. Mummy had been to the National Museum of Korea before, but a friend of ours recommended the Children's Museum for the girls.

We arrived at the museum just after 10 am. There was a guided tour in English that we were keen on, but knowing how punctual the locals are, we would have missed it by minutes. We were also stopped at the door as we were still munching on our breakfast that we had packed along, and no food was allowed inside.


When we got to the information counter, as expected we were told the group had set off 3 minutes ago. Still, the staff put in great effort to locate the group and brought us to link up with the guide. Not only were we able to benefit from the tour, but their service and kindness were a great start to the visit.


The galleries are organised into three floors, with the first floor focusing on the origin of Korean culture from the prehistory, ancient and medieval and early modern kingdoms.

We linked up with the group at on the first floor at the Prehistory and Ancient History Gallery as they were entering the gallery on the Gaya Confederacy.

The gallery showcasing the Silla Kingdom is characterized by the many artifacts made skillfully from gold. Among them is the Gold Crown and Girdle, and the guide explained the details and meanings of its tree-like form and jade ornaments. 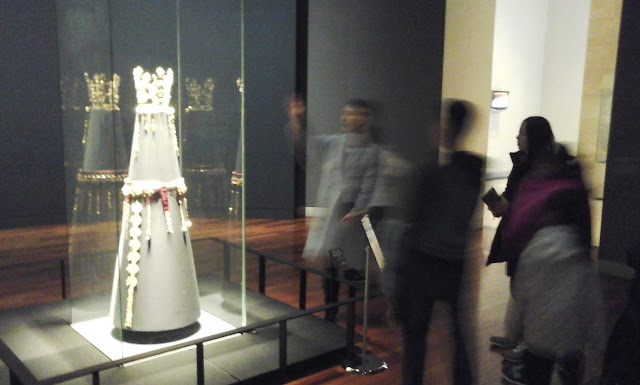 The first floor also includes a number of galleries we did not have time for. Mummy spent over three hours on her last visit, and the guide only had an hour. We moved up to the second floor to see the Wood and Lacquer Craft collection. The highlight of the gallery were the furniture pieces, such as tables and cabinets, that were intricately finished with mother-of-pearl designs. 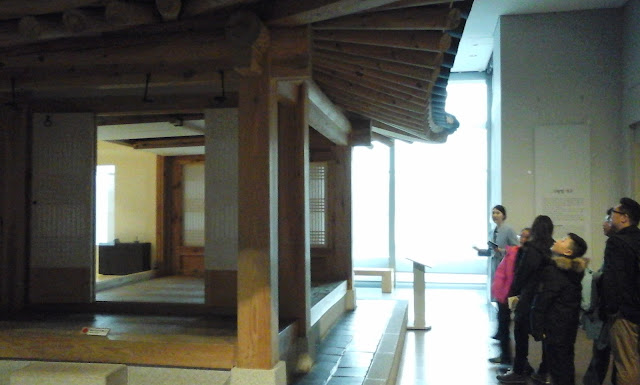 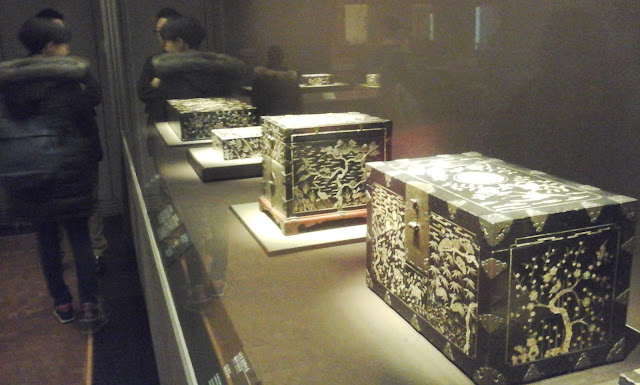 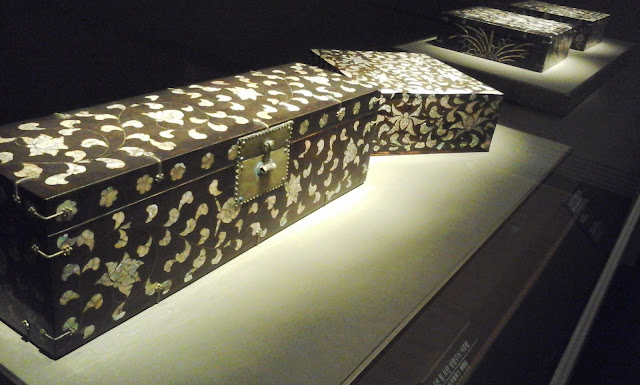 We leave the second floor after the viewing all the wood-craft and proceed to the third-floor. On the way, we have a spectacular view of the the pagoda roof. Look how tiny the visitors look below!


There are even more collections on the third floor, but our hour only allows us to see the Buddhist stone sculptures, Metal Crafts and Celadon collections.

The Metal Craft collection had bells and gongs of various sizes. There were details on the gongs and bells that would otherwise go unnoticed and unappreciated if we had gone around on our own, such as the meaning of the figures and ornaments decorating these instruments. It would definitely be useful if you can hop onto the guided tour before allocating another 2 hours to explore the rest of the halls. 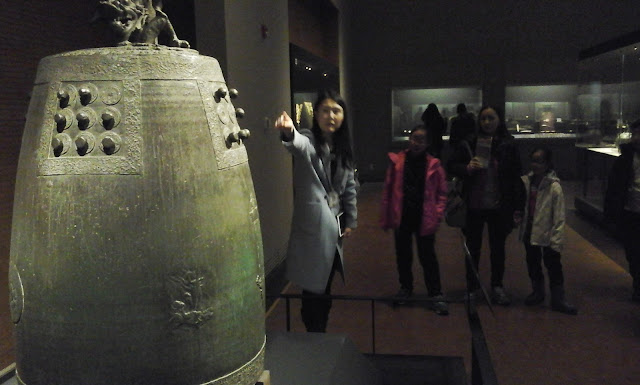 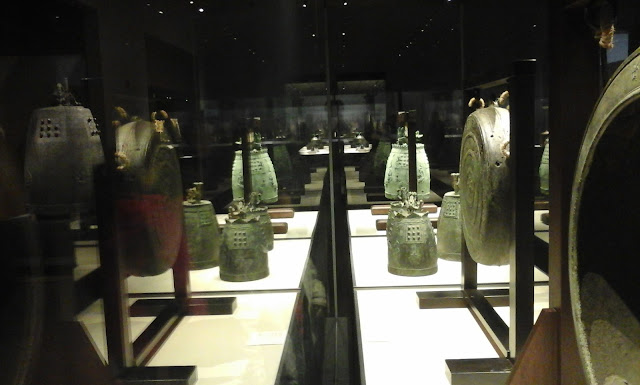 Celadon refers to Korean pottery that is glazed in the celadon or jade-like colours. The museum boasts a huge collection, and going through it we were able to appreciate the different techniques that the artists used to decorate the pieces, and also the influence foreign cultures had on the people at different times. 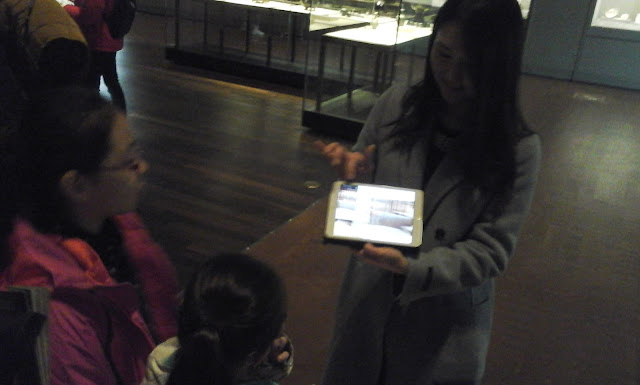 Many of the earlier pieces appeared to have some practical uses and monochromatic. 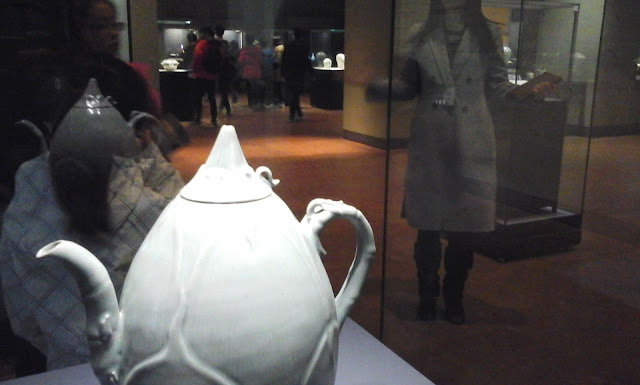 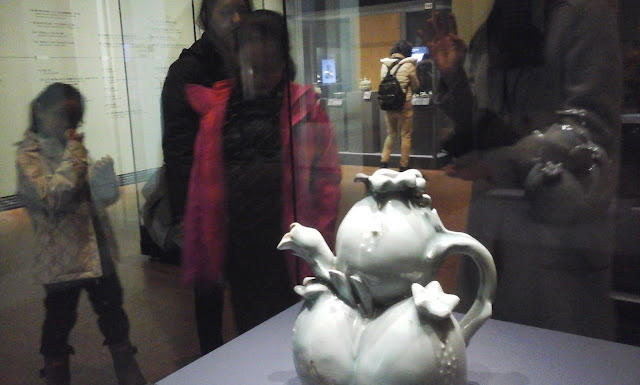 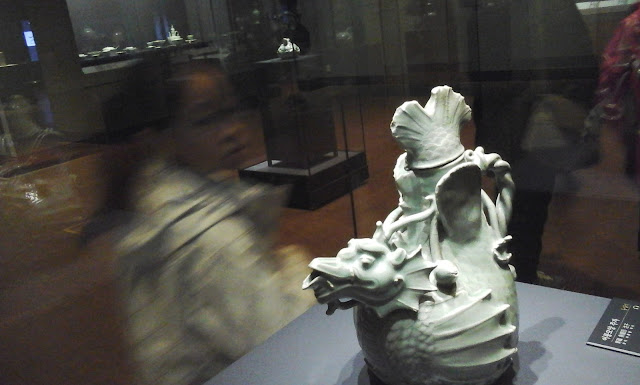 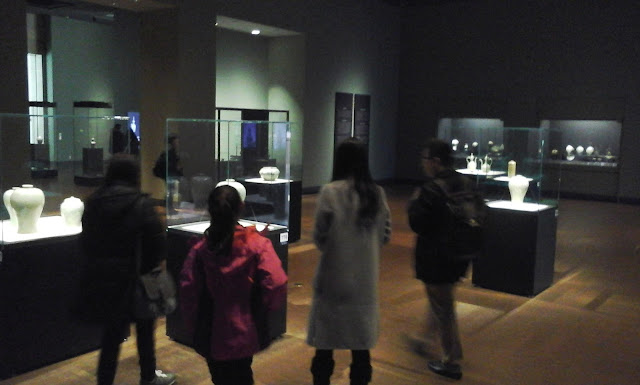 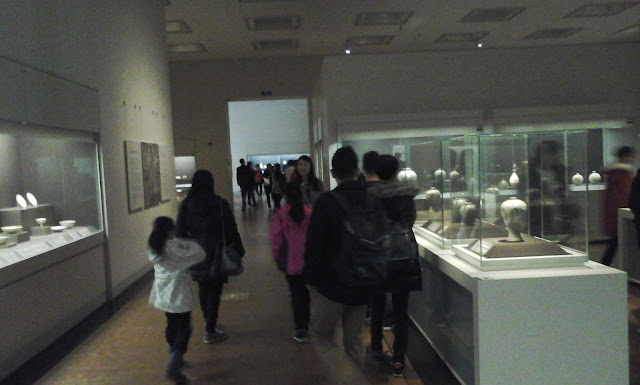 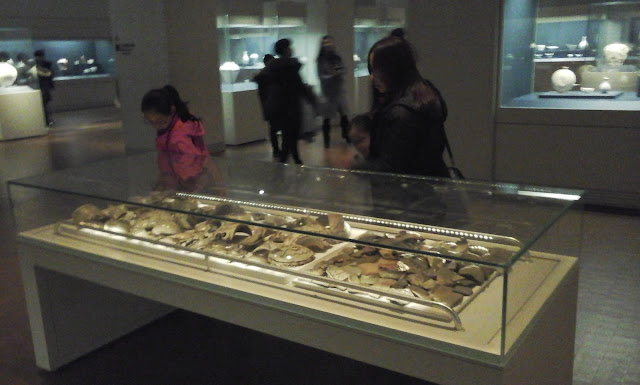 Our time on the guided tour had come to an end, and despite not covering even half of the galleries, we decided to explore the Children's Museum in the adjacent building.

Entry is free, but visitors to the Children's Museum have to adhere to fixed time-slots so that the Museum can regulate the number of children in the museum at any one point in time, and ensure that it is never over-crowded. This was important as there were many elementary school children on excursions. However, we came at the right time and many of the groups were having lunch, and we were able to extend our time slot for an additional period.

The girls spent over an hour in what was a large, stand-alone section. Mummy went in with them while Daddy decide to station himself in the rest area and get some work done as there was complimentary museum WiFi available and Daddy had brought his netbook. He shared the rest area with groups of children who took turns to have their meals. Most of the children brought their own food and drink. There was a water dispenser just outside the rest area. It looked like an ideal place for small groups to rest their feet if they intended to spend long hours exploring the complex.

It was way past lunch time and we decided to head back to Myeongdong first and eat there so that we could get some rest before the Jump! show later tonight. Budae jiggae, literally translated 'Army Stew' is one of the dishes we like on a cold day. Why 'Army Stew'? It has something to do with canned food so you can go and figure it out!


The girls actually liked the sausage and ramen with their rice, so it was a relief that they were able to enjoy it as much as we did. But there's always room for dessert. 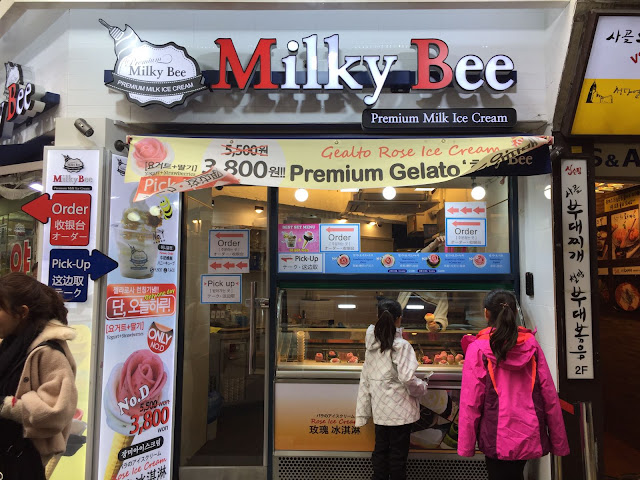 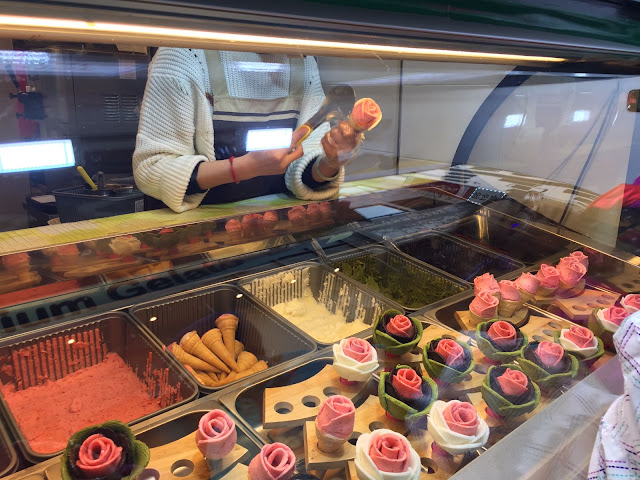 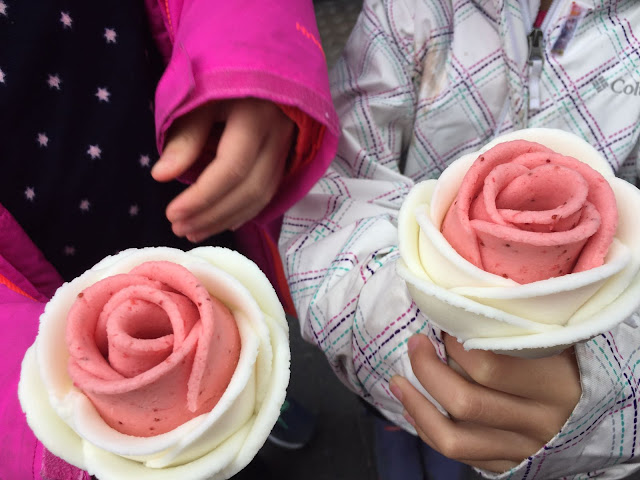 Daddy did not join the girls for the show that night, preferring instead to explore the nearby Namdaemun Market for some wholesale marketing. He left right after 'teanner' (tea + dinner as coined by the girls) while the girls went back to the apartment to freshen up.

Daddy's favourite section of any traditional market is the wholesale foods section selling meats, fish, fruits and vegetables. It took a while to navigate the huge place, with huge sections dedicated to fashion and other accessories that he was not interested in. Nevertheless, he found his treasure, and here are some photos from his walk. 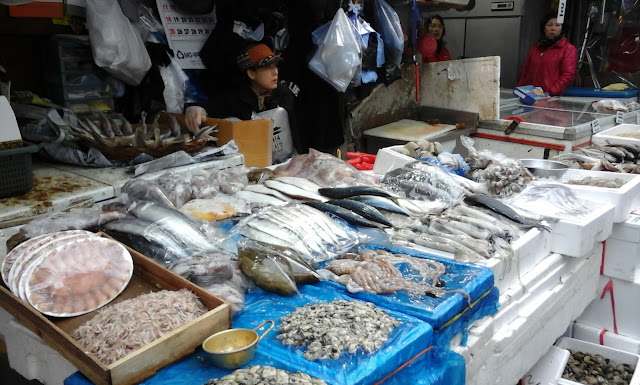 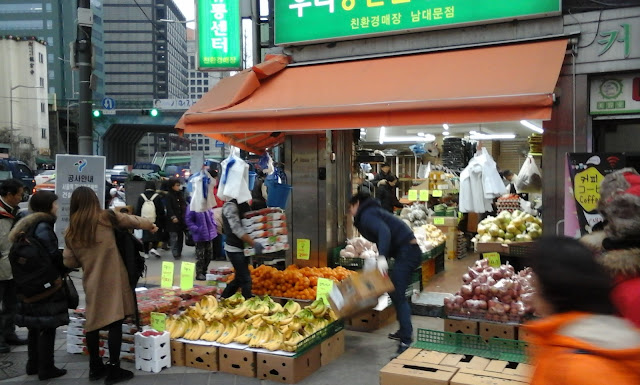 In the meantime, Mummy and the girls were taken for an adventure when they could not find the theatre. Even the residents did not seem to be able to give clear directions. To make matters worse, the heavens opened and for the first time in our trip, it rained heavily. Mummy wanted to give up as it was cold and she was worried about the girls walking in the rain but they persuaded Mummy to press on despite being late. When they finally arrived 20 minutes late, the staff were gracious enough to admit them even though shows like this value punctuality and avoid allowing latecomers in just like that. You can ask your hotel concierge or airbnb host to book the tickets for you or you can arrive 30 minutes before the show and purchase your tickets. 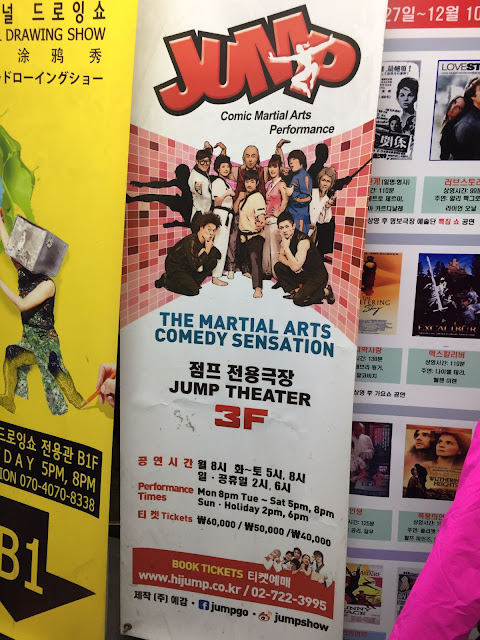 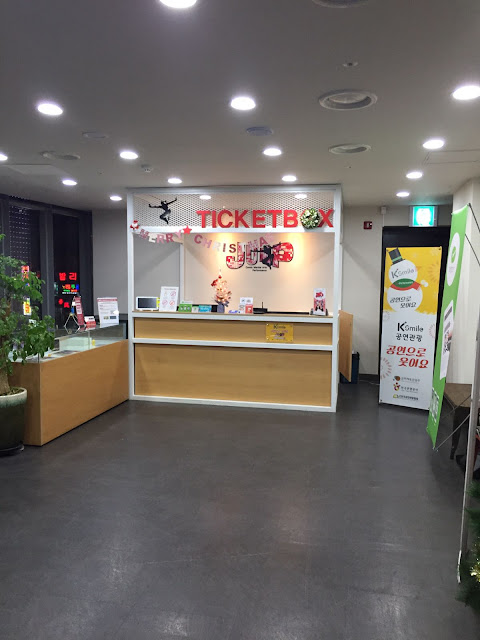 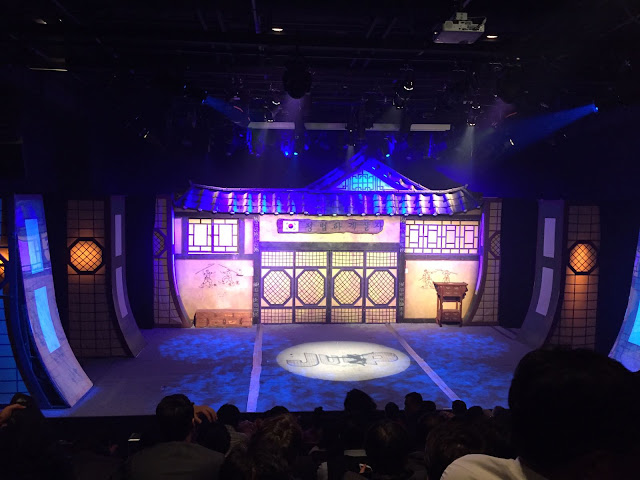 The show is not in Korean so it is suitable for all. The show combined both slap-stick comedy and kung-fu moves so the girls really enjoyed themselves. They started raving about it to Daddy when they returned to the apartment, even after braving the rain once again to make it back. We are glad they were able to enjoy it despite the hiccups finding the place. We highly recommend it for those of you visiting Seoul and enjoy a good laugh. Just make sure you know exactly where the theatre is before going.

And just like that, our final day in Korea is over. Tomorrow, we will stay in and spring clean the apartment so that we can leave the place as beautiful as we found it.

We know that one day, we will look back, read these travel logs with a smile, laugh at the photos and remember the good times. This, aside from presenting a treasure chest of opportunities for our readers to discover for themselves, is one of the reasons why documenting our experiences has been so enjoyable. May it also be a reminder to us to treasure the time we have with our loved ones! Happy holidays!

With Kids We Go

For a family with 2 young children, travelling can be quite a feat. Yet, when we overcome the challenges, travelling can be such a wonderful experience. With kids, we go, see, laugh, enjoy and more importantly, bond. We, too, learn to see the world from different perspectives. Enjoy your journey.
Dear readers and friends, if you have been enjoying our blog, do sign up as one of our followers. We look forward to sharing more of our journeys with you. 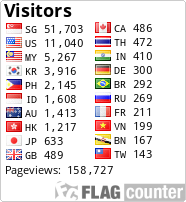